My previous blog – Realization of the True Vision of “Atmanirbhar Bharat” Requires Modernization of Laws – outlined my views on the need for India to modernize many of its laws in order to make faster and more tangible progress towards “Atmanirbhar Bharat”. I had also pointed out that sectors such as education need to be transformed so that future generation is equipped with skills that are relevant for the future. But as I pondered over our country’s transformation, it struck me that while making new laws and updating outdated ones to make them relevant to the current realities and emerging possibilities of the world is important, we need much more. After all, a lot of negatives such as bribery, workplace harassment, rape etc. exist in our society despite there being enough laws against them (although it can be argued that implementing them consistently or ensuring that justice is always delivered are another matter altogether).

In the context of nations transforming themselves, I remember reading about how Japan and Germany rebuilt themselves after being all but destroyed in the mid-1940s. In the early days, Japanese products were not known for the quality that they have been known for since the 1980s. But the Japanese people would buy locally-made products to support a nascent domestic industry. A couple of decades later, we saw the emergence of South Korea, Singapore, and Taiwan as other notable examples. Perhaps the most recent success story is that of China. As may be seen from the chart below, till the mid-1980s, India and China were at approximately similar levels of GDP. It is only in the last two decades that China has grown so much faster than we have, making its economy five times as large as ours. 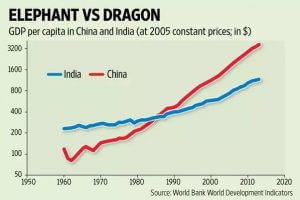 [1] Figure: Graphical representation of GDP of India and China

What is the common thread that runs through the transformation of all these countries? In my view, it is national pride and the resulting sense of collective purpose that created a virtuous cycle of sustained innovation and excellence. Japan and Germany found their mojos in the automotive, consumer electronics and heavy engineering and chemical sectors. Over time, South Korea took over the mantle of the world’s electronics hub, while China has become the “world’s factory”. Even a relatively small country like Taiwan has demonstrated its prowess in high-tech manufacturing.

The rise of India’s own IT services industry in this century is another good example of the fact that the right leadership can harness determination and pride to great effect. In this case, private enterprises took the lead in the mid-1990s. There were few regulatory restrictions to begin with and soon, with enablers such as SEZs, companies in this space thrived. TCS, Infosys and Wipro were the initial home-grown leaders, but thereafter, others, such as HCL and TechMahindra emerged. Today, foreign companies have a significant presence in India- a tribute to the strength of our talent.

But this blog is not about the success of Indian IT companies. The mantra behind the success of India’s software industry is pride. A sense of belonging (and aspirations) powered every individual associated with the industry to refine delivery models, introduce automation, etc. All this allowed companies to constantly reinvent themselves in line with what their customers expected and needed. A similar sense of pride needs to be instilled in all our citizens so that no matter what they do, they aspire to be the best.

I recall watching a video circulated on Whatsapp some years ago, that showed a young Indian boy who had picked up a smattering of several foreign languages. This helped him to converse with foreign tourists and he was able to sell his wares to more people. Imagine if tourist guides across India picked up multiple foreign languages and were able to explain the local sights and sounds better. Of course, it can be argued that technology allows tourists to buy a headphone and listen to a commentary in a language of his/her choice- but that would be a one-way communication and inherently limited to what the recording offered.

It is said that one can confidently set one’s watch to the time Japanese trains arrive/depart from their train stations. That is a mark of pride in being punctual and also people taking pride in their work. Sadly, these are not yet virtues that have been embraced by a majority of us. Mumbai’s famous “dabbawalas” are a stand-out example of a group of people taking pride in their work, and thus maintaining consistently superior levels of six sigma performance.

For years, India’s DRDO (Defence Research & Development Organization) has been accused of not delivering the kind of indigenous products that our defence forces needed. But in recent years, several products and systems have emerged from DRDO’s various labs that are likely to be inducted into the armed forces in the next couple of years. In fact, the past two months alone have seen at least half a dozen tests of tanks, missiles, radars and so on. Pride in one’s work will lead to better output and outcomes. These will raise the confidence that stakeholders have in the organization, and open the doors for more budgetary allocation to drive even more R&D.

The ISRO (Indian Space Research Organisation) is perhaps one of the best examples of this virtuous cycle. Over the decades, many of India’s space scientists and engineers chose to work for ISRO out of a sense of passion and pride, and not because they could not find jobs elsewhere. It is not as if ISRO has not had setbacks- but they have had many more successes than failures. As space becomes the next arena sought to be dominated by various countries, this sector will become even more strategic for India, given its implications for national security, communication and disaster management.

Now that space as a sector has been opened up to India’s private sector, there will inevitably be pressure on ISRO to maintain its trajectory of performance. But I believe that the sense of nation-building and pride in India that Dr. Sarabhai and his successors have instilled in ISRO will enable India’s space agency to retain its edge. ISRO may well team up with private-sector startups to take India’s space tech capabilities to a higher orbit- a win-win for ISRO, the private sector and India as a whole.

Cleanliness is another attribute of a city or country that evokes pride. Over the past five years, the residents of Indore have been taking pride in their city being declared the country’s cleanest- and this has rung in attitudinal and behavioural changes. I am not denying the role of the civic authorities in maintaining cities clean, but unless residents cooperate, no civic authority can succeed. I was born and raised in Calcutta (as the city was called before 2001). Even the most diehard Calcuttans will agree when I say that until a few years ago, Kolkata was not a very clean city (it has become much cleaner now). But right from when the city’s first metro service (also India’s first) began in the mid-1980s, metro stations and trains were remarkably clean and well-maintained. This was because the city’s residents took pride in their metro system.

This sense of pride must extend to all categories of Indian products and services- from public transport to private cabs; from real estate agents to sub-registrar offices; from small clinics to multi-specialty hospitals and so on. Only then can we as a country develop in an inclusive manner and not in a lop-sided way that constantly widens the gap between the rich and the poor or between urban and rural residents. As states compete to attract investment, infrastructure, tax breaks, labour laws and availability of talent locally are important determinants of how successful they will be. But imagine the attractiveness of states that have cities that are clean, or whose people take pride in punctuality, not striking work, etc. These factors will, in my view, play a vital role in delivering the true promise of “Atmanirbhar Bharat”.

This sense of pride must extend to all categories of Indian products and services- from public transport to private cabs; from real estate agents to sub-registrar offices; from small clinics to multi-specialty hospitals and so on. Only then can we as a country develop in an inclusive manner and not in a lop-sided way that constantly widens the gap between the rich and the poor or between urban and rural residents. As states compete to attract investment, infrastructure, tax breaks, labour laws and availability of talent locally are important determinants of how successful they will be