Recently in September, 2022 Amul- the most prominent dairy brand in India released a doodle, featuring the famous “Amul girl” celebrating the return of eight Cheetahs in the Kuno National Park, Madhya Pradesh. Over the years, the Brand has managed to position Amul Butter as a household staple through its alternate identity- Amul Girl. The Mascot regularly makes clever puns on the day-to-day political and policy developments while communicating their product’s “utterly butterly deliciousness”. 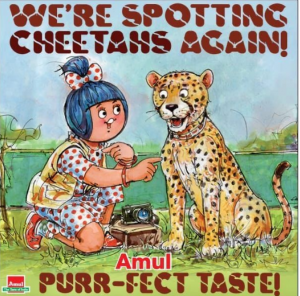 Creativity involves breaking expected patterns to look at things differently. The notion of being creative and deploying “out of the box” marketing strategies to drive brand and consumer growth is not a new concept. The ever-increasing competition and the digital revolution have forced brands to go out of their way to stay afresh and ahead of the competition while maintaining their brand identity.

Fluid Trademarks are a relatively new, up-and-coming category of marks that businesses are increasingly using to differentiate their brands and products from the competition. The Morehouse defence[2] (along with Section 43(a) of the Lanham Act)[3]  defines fluid trademarks as marks that change over time (with respect to the original or registered mark) to increase customer engagement. Albeit not explicitly defined, the defence serves as an equitable doctrine that applies when an applicant owns a prior registration “for essentially the same (or substantially similar) mark and goods or services, and for which registration has not been challenged.”

What are Fluid Marks?

Many brands frequently deploy such marks to commemorate certain special occasions or landmark happenings, enabling them to keep in touch with the ongoing trends and strengthen brand awareness by promoting interaction with the consumers.

For instance, Google’s ‘Doodle’ could be termed the quintessential fluid trademark, where different variants of the Google logo have been used over the years to mark or memorialise national/international events and festivities. Absolut Vodka is another brand that has been commercialising various iterations of its mark by launching special edition bottles to commemorate events. Some other examples of Fluid Marks being deployed by renowned brands in their marketing strategy include Nike’s ‘Just Don’t Do It’ Swoosh, BMW’s spaced logo citing ‘thanks for keeping distance’ during Covid-19, and Starbucks’ ‘Masked Mermaid’.[4]

While it is appreciable that brands are deploying newer strategies to connect with their consumers, the use of Fluid Trademarks presents some pertinent roadblocks when it comes to IP protection that these brands need to take note of.

Although there are no explicit provisions or synonymous precedents citing protection for fluid trademarks in India, registering each iteration of the base mark, which would just be deployed occasionally by these brands, would not make much business sense since it would not be cost-effective in the long run.

Section 15 of the Trademarks Act,[5] 1999 accords protection for a series of trademarks, but it is pertinent to highlight here that the section is effective only when all the variants of the base mark could be anticipated in advance,[6] which is not the case with Fluid Trademarks because of their dynamic nature.

Existing commercial identity and recognition of the base mark do accord common law protection to Fluid Marks. Still, it is pertinent for brand proprietors to consider the following essentials while endeavouring for the protection of Fluid Trademarks:

The importance of having the base mark registered for the fluid mark to have any chance of protection was highlighted in the recent case of McGurr v. North Face Apparel Corp.[8], where the US-based artist, Futura, was denied protection for his recognisable, signature stylised atom design because the base mark, i.e., the shape of an atom, was not registered. The District Court for the Central District of California noted that legally recognising fluid trademarks “would give new meaning to federal trademark law with far-reaching consequences.” The court rather recognised copyright law as a more robust source of protection for entities facing similar situations.

Fluid Trademarks might be the future of brand building. They have indeed emerged as an excellent tool for businesses across the globe to engage and interact with their customers while simultaneously allowing them to keep in touch with ongoing trends. But as long as the legislature or the judiciary steps up and develops a robust set of guidelines for their protection, it would be feasible to work with an experienced IP attorney who could assist applicants to come up with a smarter plan of action for the protection of their dynamic and ‘fluid’ marks.

[4] These famous logos have been remade for the Coronavirus Age, Media Marketing, Accessible at: https://www.media-marketing.com/en/news/famous-logos-remade-coronavirus-age/