Land pooling policy was notified on October 11, 2018, for six zones spread across 109 sectors in 95 urbanized villages in Delhi. The land pooling technique has been successfully utilised in several states across India. The scheme aims to pool land parcels for the purpose of developing the land in toto and returning the developed land parcels back to the landowners. It creates a win-win scenario for both the state and landowners. Land pooling, unlike other schemes, ensures that the rights of landowners are protected and that the scheme is implemented through a participatory mechanism. Since there is no acquisition of land, the cost of such schemes is significantly lower.

The National Capital Territory of Delhi is one of the oldest cities in India. It is densely populated, and like many other cities in India, it suffers from unplanned development and poor habitation conditions that have plagued the city for decades. For the purpose of planned development and better living conditions, the Delhi Development Act, 1957 (DDA), was enacted, and recently, the Ministry of Housing and Urban Affairs released a set of proposed amendments to the DDA Act to facilitate and operationalize land pooling. The draft was shared for pre-legislative consultation and, this article analyses the recommendations made therein.

Objectives of the Proposed Amendments

The benefits of land pooling mechanisms for developing the national capital region were identified, and to facilitate the same, the proposed amendments are being mooted, along with several consequential changes that have been proposed.

The reluctance among a few landowners to participate in the land pooling policy has hindered the state from implementing planned development. In order to achieve contiguity in the land parcels available for land pooling, the proposed amendment also facilitates mandatory land pooling or urban regeneration. The Central Government is empowered to direct the urban local bodies (ULB) or the authorities to notify mandatory policies.

The tools of land pooling will be vital in achieving the goals of planned development. The proposed amendments are aimed at operationalizing two key policies, i.e., land pooling policy and urban regeneration policy.

Analysis of Chapter IV A

The amendments limit landowners’ ability to develop an area after it is designated as an area eligible for policy or a mandatory policy area. The authority or the urban local body is empowered under the proposed amendment to appoint a designated officer or agency for the purpose of implementing the scheme.

Another key amendment proposed is that after the minimum threshold under voluntary participation for either of the policies is achieved, it is mandatory for the dissenting landowners to comply with the policy.

The proposed Act amendment allows the central government to direct the authorities or ULB to notify mandatory areas for land pooling or urban regeneration for the purpose of speedy implementation of the policy. This helps the implementing agencies effectively implement planned development even without achieving the minimum threshold for voluntary participation.

The flow chart below illustrates the process of notification for each policy area under the proposed amendment. 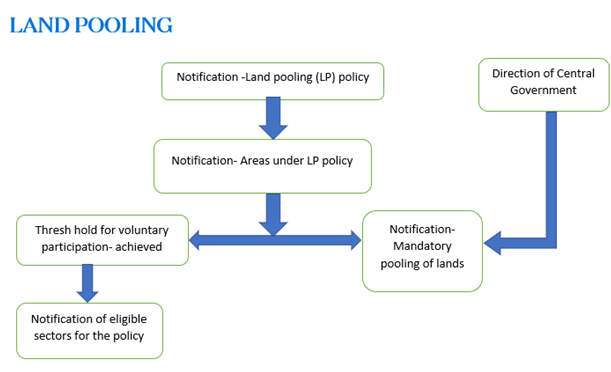 Delhi has been continuously facing several calamities, both anthropogenic and non-anthropogenic. Planned development is made mandatory in order to mitigate and avoid them. The urban local bodies are empowered under the proposed amendment to notify the Mandatory Urban Regeneration area independently, without any directions from the Central Government. Any area satisfying any one or many of the below listed conditions can be notified as an area for mandatory urban regeneration under the proposed amendment:

To effectively implement the policies, the following amendments are proposed:

The policies are implemented through the formation of a special purpose vehicle (SPV), consortium entity, or joint venture comprised of land or property owners and the implementing agency (DDA/ULB). This ensures a participatory mechanism and protects the interests of landowners at each stage of the policy.

Restrictions on Use and Sale

The policy can impose such restrictions on the transfer or development of land or built-up structures under the Act. This is done for effective implementation of the policy.

Another key amendment proposed is an exemption from stamp duty implications. This helps in avoiding the multiple stamp duties that are attracted when land is surrendered and then reconveyed after development, which creates a financial burden.

The proposed amendment also ensures that pending disputes over the title to land or buildings do not hamper the implementation of the policy. The person with clear title as adjudicated by a competent court will be conveyed a developed land parcel after policy implementation.

The proposed amendment also provides for the statutory vesting of lands and buildings and empowers the implementing agency to evict people summarily for the purpose of land pooling or urban regeneration.

Exemption from the Right to Transparency and Fair Compensation in Land Acquisition Act, 2013

Since land or property is conveyed back to the owners, the policy shall not attract provisions of compulsory acquisition under the Right to Transparency and Fair Compensation in Land Acquisition Act, 2013. Also, persons whose land is acquired or whose rights over property are affected such persons shall be compensated by the grant of transferable development rights.

The proposed amendment act aims to create planned development that is essential for any urban center. It assures effective implementation of the policies as they remove the roadblocks that were earlier faced, such as stamp duty implications or a lack of participation by people. Where the minimum threshold for policies is achieved, it is mandatory for the rest of the owners to comply with the policy, ensuring the contiguity of lands. Also, the central government has the power to direct notification of mandatory policy areas, which provides flexibility to the government in implementing policies in a time-bound manner.

The proposed amendment act establishes criteria for an urban local body to notify an area as a mandatory area for urban regeneration; however, there is no provision in the Act seeking to show cause why such notification should not be made from landowners or property owners. And there is no room for challenging the notification for mandatory land pooling or mandatory urban regeneration policy. Therefore, there is a need for setting up a grievance redressal mechanism.

The proposed amendment act has demarcated the roles and obligations of a landowner or property owner; however, it is silent about the occupiers of the land. Since many of the areas have a significant portion of the population residing as tenants and not as owners, it is necessary for the proposed amendment act to address the rights and duties of occupiers of the land or property under the policies.

The proposed amendment act empowers the authorities and ULB to evict people summarily, but it is silent on the provision of transit accommodation or rehabilitation or relocation allowance for persons displaced due to the policies.

The benefits of land pooling mechanisms for developing the national capital region were identified, and to facilitate the same, the proposed amendments are being mooted, along with several consequential changes that have been proposed.

The reluctance among a few landowners to participate in the land pooling policy has hindered the state from implementing planned development. In order to achieve contiguity in the land parcels available for land pooling, the proposed amendment also facilitates mandatory land pooling or urban regeneration.